Radon, also known as Radon-222 and 222Rn, is a radioactive, tasteless, colorless, and odorless gas. It is formed when uranium first breaks down into radium and then further decays to radon. When the gas is inhaled it may cause damage to cells that line the airways and lungs, thus leading to increased risk of lung cancer.

Radon gas can be found indoors or outdoors. It is commonly found inside schools, homes, and other structures as a result of minerals in the soil. The gas seeps up through foundations, walls, or floors. Basements and first floors usually have higher radon gas levels due to their proximity to the ground.

Radon gas in indoor air has raised concerns since it has been estimated to cause as many as 21,000 lung cancer deaths per year in the United States. Lung cancer has been the only cancer associated with radon gas inhalation.

Radon gas levels outdoors are low; although higher levels have been found in areas where ventilation is limited and the gas builds up (i.e. underground mines).

The dangers of radon gas were first suspected when incidence of lung cancer deaths was shown to be high among uranium miners. Research studies with animals continued to show a correlation between a high incidence of lung tumors and high radon gas exposure levels.

The Link Between Radon Gas and Lung Cancer

Researchers have focused on the relationship between lung cancer risk and residential radon exposure and its effects. Comparisons of radon gas levels have been made between homes where residents have and have not developed lung cancer.

Research led by the National Institute of Environmental Health Sciences studied residential radon gas exposure among women (413 with lung cancer and 614 without lung cancer) that lived in their homes for at least 20 years. Data was recorded concerning various factors such as radon gas level measurement in the participants’ homes, information about the homes, and observation of lung cancer tissues. The outcome of this study indicated a link between lung cancer incidence and high rates of continuous radon gas exposure. Other research has been conducted throughout the United States and other regions of the world. The majority of research likewise shows a relationship between residential radon gas exposure and a high incidence of lung cancer; although there are cases where there have been inconsistencies in some studies. Discrepancies may be due to variations in radon levels in different homes, difficulty in radon gas measurements over long periods of time, and varying sizes of groups that participate in studies.

More accurate ways to measure radon gas exposure are being developed. Researchers used a new method for measuring indoor radon gas levels during a study conducted in Sweden in 2002. Scientists used objects (i.e. glass, mirror, etc.) that had remained present in a home for an extended period of time (15 or 20 years) to measure radon levels. This and earlier methods of radon gas measurement have shown a relationship between long-term, high-level radon gas exposure and lung cancer.

The first step that should be taken to protect a home and its occupants against radon and its effects is to test the indoor gas levels. The radon levels are based on the soil underneath and surrounding the home, and the ways in which the gas enters the home. Additionally, radon levels may vary based on barometric pressure, precipitation, and other variables. Short and long-term tests are available since the gas levels can vary day to day. Because of level variances, long-term tests may be more accurate indicators for radon gas level averages. Both test types are affordable and easy to use.

The U.S Environmental Protection Agency (EPA) recommends testing radon levels since high levels have been found in homes throughout the nation. The agency also recommends reducing radon gas levels in cases where they are found to be above 4 picocuries per liter (pCi/L). The EPA states that nearly 1 out of 15 homes has levels of radon gas at or above this unsafe level. According to researchers, the number of radon-related lung cancer deaths could be reduced by approximately 5,000 if radon gas levels are lowered below the 4 pCi/L threshold.

Although there are various do-it-yourself radon gas testing kits available, certified radon-testing professionals can perform tests for homeowners that don’t feel comfortable doing it themselves. If a home needs radon gas reduction, the cost may vary from $800 to $2,500 (average $1,200) depending on the type of radon gas reduction techniques used and the size and design of the home.

The EPA recommends that radon reduction techniques be performed by a licensed radon mitigation contractor or state-certified contractor. The EPA has published an online consumer guide to radon reduction that is available to the public at the following web address: http://www.epa.gov/radon/pubs/consguid.html.

How Radon Enters a House 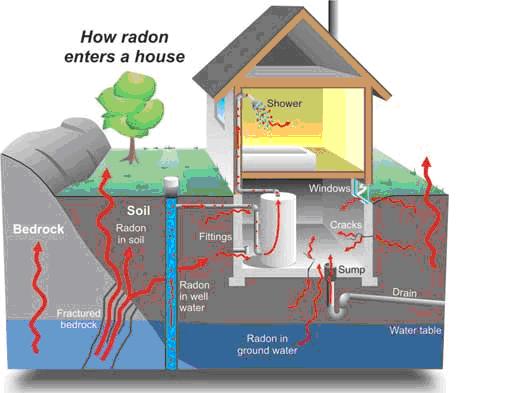 Occupations at Risk for Radon Exposure

The following occupations have the potential for high 222Rn progeny exposure: