Lung cancer is one of those diseases where no one is immune...

and the root cause is not always evident. Some risk factors, such as smoking tobacco, are more obvious than others. After all, not only are there are more than 60 carcinogens in cigarette smoke, but smoking also weakens the lungs. The weakening in the lungs reduces their capacity to get rid of toxins, making them much more susceptible and vulnerable to be attacked by carcinogens. However, even people who have never smoked can be diagnosed with lung cancer.

Smoking aside, scientists agree that many other factors can increase the chances of developing the disease. 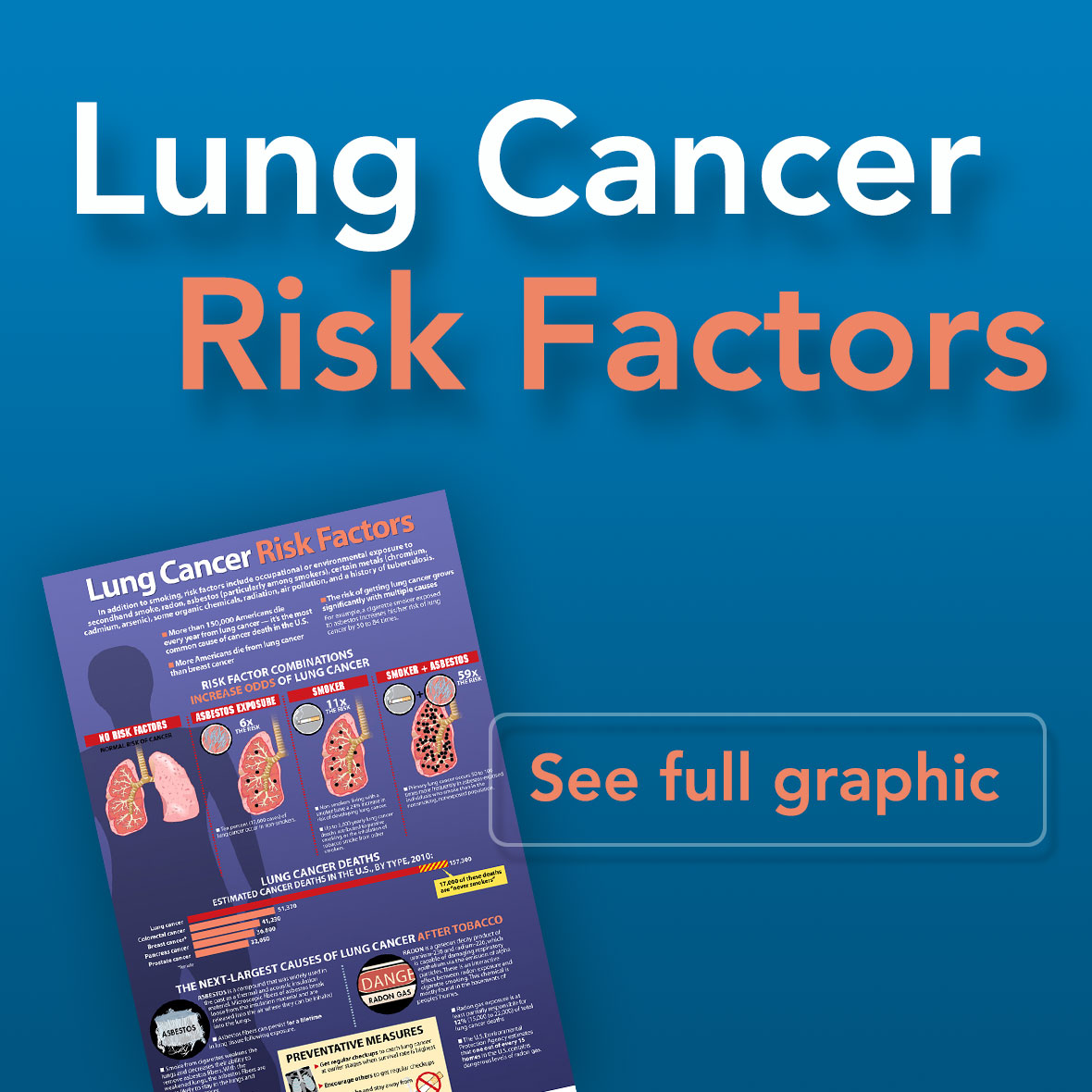 Other Causes Of Lung Cancer

A gaseous decay product of radium-226 and uranium-238, radon can damage the respiratory epithelium (the cells that line the lungs) through alpha particle emissions (a form of radiation). Uranium miners face an increased risk of lung cancer, probably due to radon radiation. Many armed forces members came into contact with depleted uranium and radon during military service, as did employees of defense contractors. See our pages on radon as a cause of lung cancer and uranium as a cause of lung cancer.

Also referred to as environmental tobacco smoke (ETS), secondhand smoke has been identified as a significant risk factor for lung cancer in people who have never smoked. According to the American Cancer Society, up to 20% of lung cancer cases among never-smokers are associated with ETS.

More on secondhand smoke as a cause of lung cancer. 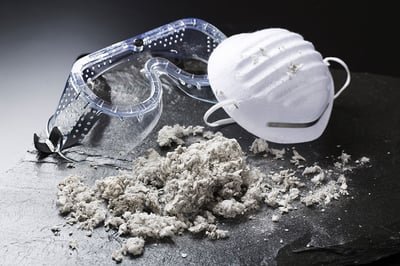 Asbestos is a known cause of several types of cancer, including lung cancer. The asbestos fibers can become airborne and get into your lungs. Often, lung cancer (or even mesothelioma) doesn’t show up until decades after your asbestos exposure. If you have lung cancer and were exposed to asbestos, even decades ago, you may be eligible for compensation. Click here to learn more.

Studies have shown a synergistic relationship between asbestos and tobacco smoke in the causation of lung cancer. The studies found that in approximately a third of the lung cancer cases where smokers had asbestos exposure, the lung cancer was attributable to the “synergy” of the two working together rather than either individual carcinogen.

The combination of tobacco and asbestos exposure has been proven to cause lung cancer much more frequently than either smoking or asbestos on its own. In fact, when a smoker is exposed to asbestos fibers, his or her risk of lung cancer increases 50-fold.

Agent Orange was a mixture of plant-killing chemicals (herbicides) sprayed from airplanes during the Vietnam War that became airborne and entered the lungs of ground troops. The Department of Veterans Affairs has acknowledged that Agent Orange is carcinogenic and provides benefits for qualified cancer patients with a history of exposure. See our page on Agent Orange as a cause of lung cancer.

Environmental exposures that damage DNA can also result in lung cancer. These exposures may include: 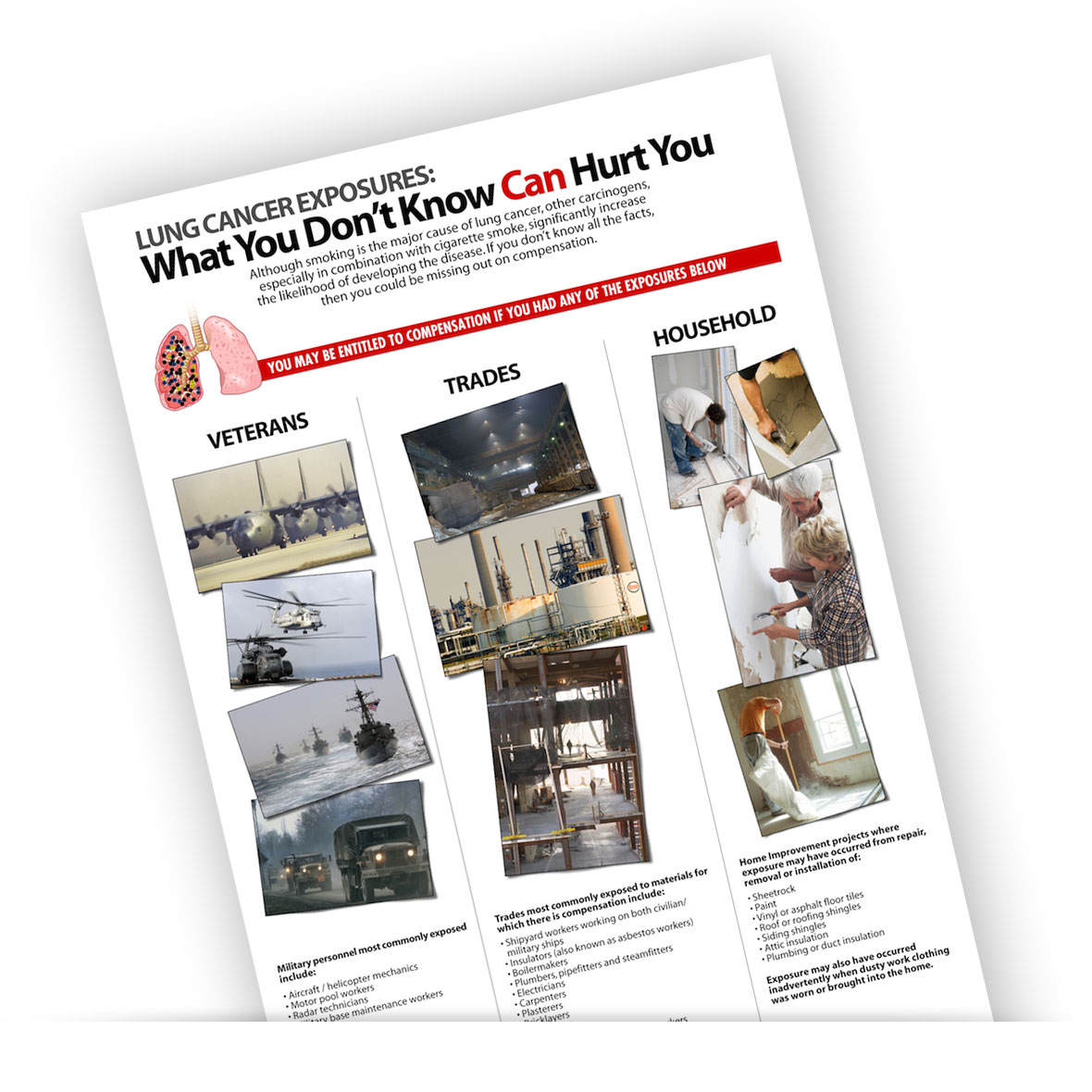 Where Were You Exposed to Carcinogens? 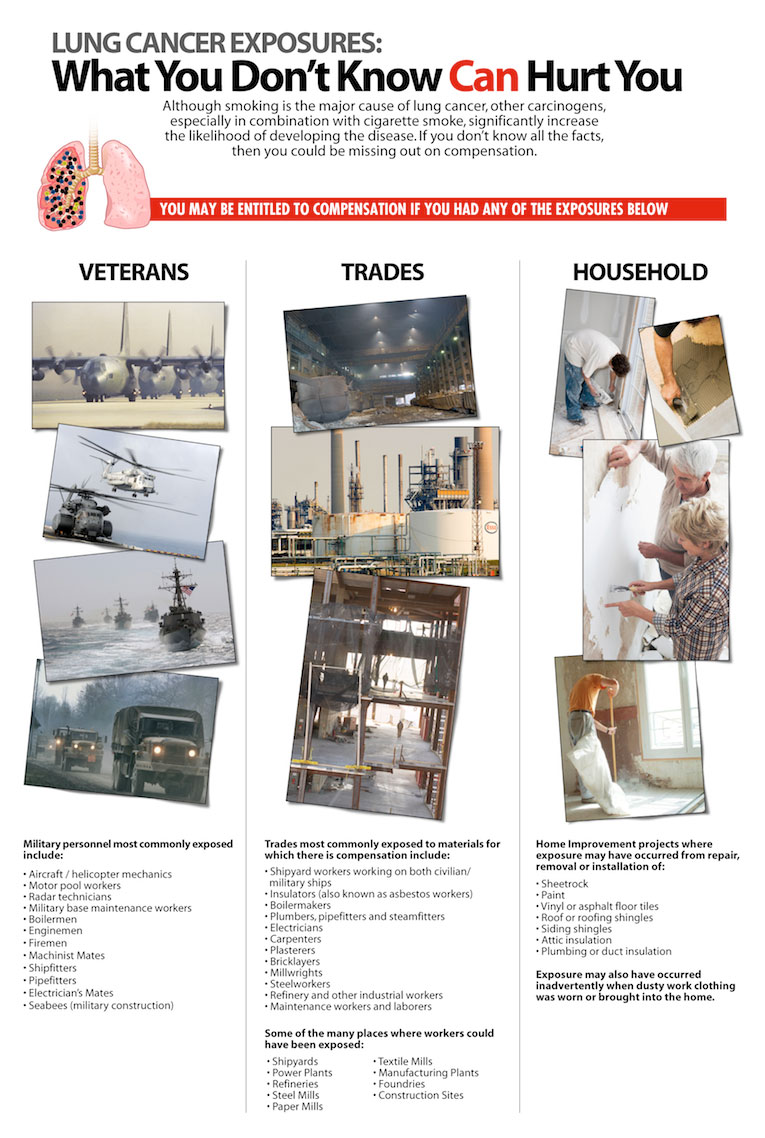 Several types of occupational exposures have been identified as factors that increase lung cancer risk among smokers and never smokers. Many other jobs brought workers into close contact with asbestos and other carcinogens, including:

Men and women in these trades may have come into contact with asbestos in insulation, cement, ceiling tiles, brakes, and other hazardous materials. Carcinogens in these materials include asbestos, beryllium, heavy metals, and hydrocarbons.

Thousands of veterans have contracted lung cancer after being exposed to asbestos. Often lung cancer doesn't show up until decades after asbestos exposure. Members of all branches of the military were exposed to the same materials as civilian workers were. Exposure to beryllium and depleted uranium was widespread among service members because those metals were used in defense systems. Also, the Agent Orange herbicide was used extensively during the Vietnam War.

Radon accumulates in buildings’ basements in some areas of the country, and asbestos was used widely in home construction for decades. Both radon and asbestos are known causes of lung cancer and pose risks for people who live in homes with those carcinogens.

You could have been exposed to carcinogens decades ago, and many people with lung cancer cannot easily remember these exposures. Even if you are or have been a smoker, or if you have never smoked, you may be entitled to compensation.

To determine if and where you came into contact with hazardous materials that could have increased your risk for lung cancer or receive compensation information, call us toll-free at 1-800-998-9729.