Lung cancer begins when healthy cells in the lung change and grow out of control, forming a mass called a tumor. When a tumor forms, it is made up of a collection of abnormal cells, all descendants of that same cancerous cell. Therefore, when a physician diagnoses lung cancer, it is important to determine which cell type is responsible for the tumor. The type of cell determines the course of treatment, the course of the disease, and the prognosis.

NSCLC gets its name from the way that the cancer cells look under a microscope. There are three main types of non-small cell lung cancer.

Adenocarcinoma is the single most common type of lung cancer, accounting for about 40% of NSCLC cases. Lung adenocarcinoma starts in glandular cells, which secrete substances such as mucus. 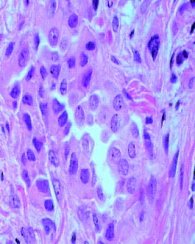 Adenocarcinoma of the lung can be divided into four categories, which are based on how the cells look and are arranged under the microscope:

This type of NSCLC is usually located more along the lungs’ outer edges and tends to grow more slowly than other lung cancers. Because of this, it is sometimes possible to guide a needle from the outside of the body in order to perform a biopsy. 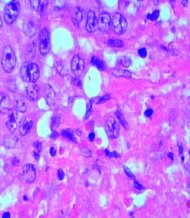 Because squamous cells are exposed to the environment during breathing, they are relatively hearty cells. In some ways squamous cells are like skin cells: they can tolerate contact with air (for the most part) and they tend to slough off (exfoliate) like skin cells. However, they are not immune to cigarette smoke and other toxic substances. In fact, the risk of developing this type of lung cancer increases in direct proportion to the number of cigarettes smoked over time.

In contrast to lung adenocarcinoma, squamous cell carcinoma is usually found near the center of the lungs. This means that it is unlikely that a biopsy can be performed outside the body. Instead, a bronchoscope (a thin tube with a light, a camera, and small surgical instruments in the tip) can be advanced down the throat, into the trachea, and to the bronchus that contains the tumor.

Unlike other types of NSCLC, symptoms are often experienced earlier due to the location of squamous cell carcinoma. This is actually beneficial as a diagnosis can be made sooner than other lung cancers overall. 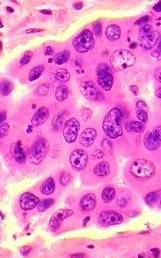 Large cell lung cancers do not necessarily occur near the chest wall, though they often occur near the lung’s edge rather than near a bronchus (in the center). Therefore, a needle biopsy may or may not be possible, depending on location. If a needle biopsy is not possible, a tissue sample may need to be gathered using a surgical approach. When this is required, the entire tumor may be removed both for purposes of diagnosis and treatment.

Large cell carcinoma is identified as being different from the other types of lung cancers histologically. These cells do not have the necessary equipment to secrete substances like adenocarcinoma. Nor do they look like scales with keratin pearls, which would indicate squamous cell carcinoma. Large cell carcinoma appears rather strange under a microscope in that it looks like sheets of abnormal cells with an area of dead cells in the middle.

Perhaps the most important reason to distinguish small-cell lung cancer (SCLC) from other types is that it behaves differently from other lung cancers. While most other types of lung cancer are slow-growing, SCLC grows very rapidly and is very aggressive, swiftly spreading to distant areas in the body (metastasis).

Small-cell lung cancers are somewhat unique in where they form in the lung. They usually grow on the bronchus— a large airway that leads from the trachea (windpipe) to a lung— but mostly stay on the lung side of the bronchus rather than growing in the airway.

This peribronchial location has advantages and disadvantages for the patient. Since the small-cell lung cancer is reasonably close to the bronchus, a biopsy can be taken using a bronchoscope. This means that often surgery can be avoided. However, since the tumor may not invade the airway, the primary tumor does not cause symptoms until it has spread. Lack of obvious symptoms delays diagnosis and treatment.

When symptoms are experienced, they may include: