Despite increased awareness and advances in diagnosis and treatment, lung cancer is still a common, lethal disease in both the United States and around the world. The American Cancer Society (ACS) estimates that over 210,000 new cancers of the lung and bronchus are diagnosed in the U.S. every year. Fifteen percent of all diagnosed cancers are lung cancer. The ACS also reports that over 150,000 Americans will die from lung cancer every year. This represents 28% of all cancer deaths. Lung cancer is responsible for more cancer-related deaths than any other type of cancer, by a wide margin.

Men and women are affected by lung cancer in roughly equal numbers though this has not always been the case. It is estimated that approximately 116,000 men were diagnosed with lung cancer in 2009 and 103,000 women. The disease is slightly more lethal for American men than it is for women. While men make up 53% of the total number of lung cancer diagnoses, they make up close to 56% of all deaths from the disease (89,000 men). This nearly equal distribution between men and women reflects the steady decrease in incidence in men over the past 20 years. In women, the rates have leveled off and stayed constant for some time. While the factors that lead to these rates are varied and complex, for the most part the changes reflect different relative rates of tobacco smoking between men and women over the past half century.

If one were to look at the US cancer death rates over the past 80 years, there was a rapid increase in lung cancer related deaths in men from 1940 to 1990. In women, a rapid increase occurred between 1970 and 1990. Since about 1990, the mortality rate from cancers of the lung and bronchus among men has dropped nearly as sharply as it rose. This is not the case for American women—the mortality rate has stayed constant since 1990 with no indication of making a significant decline. 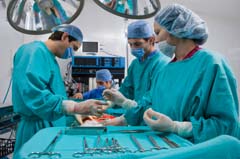 In contrast, the rates of lung cancer diagnoses and deaths have either remained constant or have declined among Hispanics/Latinos over the past two decades. Among subgroups of Hispanics/Latinos in the US, deaths from lung cancer are higher in Cuban men than they are in Puerto Rican and Mexican men. More on recent trends. The reasons for this difference are not completely clear.

What is not apparent from this data is that in both Hispanics/Latinos and African Americans, the disease is usually more advanced at the time of diagnosis than when it is diagnosed in whites. This likely reflects differences in access to healthcare. In fact, when lung cancer incidence rates are compared in a military setting where healthcare is universal, these rates are not different among races. Since the disease is more advanced at diagnosis in non-white Americans, the five-year survival rate tends to be lower. Therefore efforts to make earlier diagnoses of lung and bronchus cancer in non-white races are a priority for health care groups.